PASADENA, Calif. – Freeform is bringing back “Party of Five,” but it’s a different, more political party this time around.

The new version of the series, which ran from 1994-2000 on Fox and helped launch the careers of Jennifer Love Hewitt, Neve Campbell and Matthew Fox, tackles the story of five kids orphaned when their parents died in a car accident. But this time, the action moves into the modern era in a tale of immigration woes. 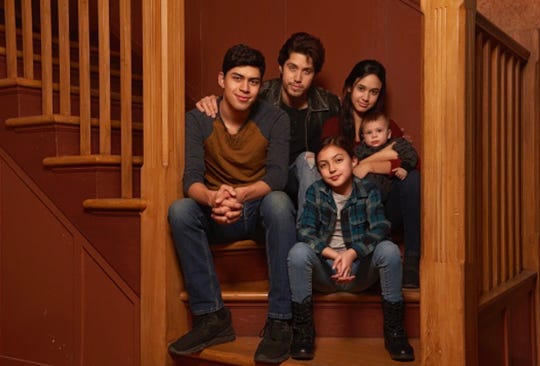 Creators Amy Lippman and Chris Keyser focused the new series on the Acosta parents, undocumented immigrants who are deported to Mexico. This leaves the kids, played by Brandon Larracuente, Emily Tosta, Niko Guardado and Elle Paris Legaspi, alone in America. Adding another wrinkle is that the oldest son, Emilio (Larracuente), is a DACA “dreamer,” and his fate is changeable and uncertain.

Speaking to the Television Critics Association Tuesday, Lippman said they waited until there was “a really good reason to do (a reboot). We began (with) what the political climate was these days. We began to see stories like this on the front page of every newspaper, (and) we began to realize what we had sort of imagined, which was a family of orphans 25 years ago, had sort of transmogrified into families of kids who are living without their parents in a very real way.”

A big difference between the Salingers of the original and the Acostas is that their parents are still alive.

“They’re not present, but they’re dealing with the issue of, ‘How do we try to parent our kids from a distance?'” Lippman said. “How do the kids deal with social services?”

The producers researched the experience of family separation, undocumented immigrants and DACA recipients, but they were mostly focused on “the emotional moment which is universal,” producer Michael Zebede said.

More: Freeform is eyeing a ‘Party of Five’ remake about children of deported immigrants

“I was excited by an opportunity to tell people this is what it’s like,” Lippman said. She inaccurately claimed that there is no path to citizenship for undocumented immigrants.

“You can (have) the best of intentions, look for a better life in the United States and if you come here illegally there is no path to citizenship without leaving the country. … To educate (the audience) about what the process is to be really thrilling,” Lippman said.

But does centering a story on a Latin family and undocumented parents make the show inherently political?

Lippman insists that it doesn’t.

“Right now, our goal is to say what do these people experience?” she said. “That’s it. You can judge for yourself whether it’s unfair, whether the choices they need to make are unfair. I think we don’t want to go in with a strong political agenda. We just want to say what is the experience like for these families.”

She added that politics can’t be overlooked.

“We certainly have story lines where we’re going to play around with (politics),” Lippman said. “We set up one character to be a little more political herself and another character who begins to shy away from the politics of it because that character is fearful of (the consequences of) being a family where the parents were illegal immigrants.”