The onetime Motown star was on form in a gorgeous “Star-Spangled Banner” at Sunday night’s Super Bowl.

Atlanta fought hard to be recognized on the hip-hop scene. However, at Super Bowl LIII in Atlanta, Southernplayalisticadillac funky music is a side dish to Maroon 5’s halftime show.
USA TODAY

Gladys Knight wowed with a resplendent rendition of the national anthem to help kick off Super Bowl LIII Sunday night.

The onetime Motown star delivered a soulfully dignified “Star-Spangled Banner” atop a cinematic orchestral arrangement, punctuated by a flyover from the U.S. Air Force Thunderbirds.

It was a homecoming performance for the Atlanta-born Empress of Soul, who took the field in a bejeweled white gown.

Knight’s appearance came amid the NFL’s ongoing controversy involving kneeling players and the national anthem. The 74-year-old singer had defended her decision to perform, saying she wanted to “give the anthem back its voice” and citing her lifelong civil-rights work.

“It is unfortunate that our national anthem has been dragged into this debate when the distinctive senses of the national anthem and fighting for justice should each stand alone,” Knight told Variety in a statement.

For the record, Knight’s “Star-Spangled Banner” clocked in at 121 seconds. The over-under betting line set by many oddsmakers was 107 seconds. 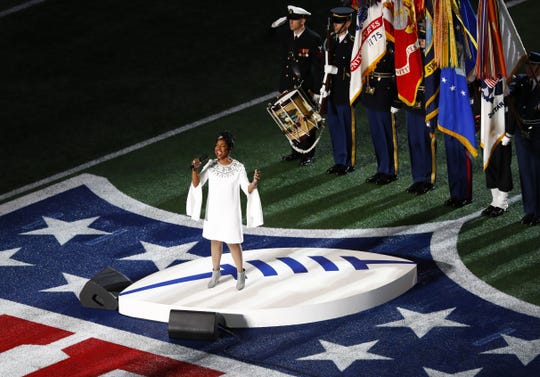 Immigration concerns keep some parents from getting their kids health services

Worst ever? Where Patriots vs. Rams ranks in history