Diver Ben Burville recorded the moment a grey seal pup approached him off the Northumberland coast. Burville says he wants to share how gentle and trusting seals can be.
USA TODAY

A series of storms during the government shutdown caused flooding at a national park in California − and now elephant seals have taken over one of its beaches.

More than 85 elephant seals are currently hanging out at Drakes Beach, a part of the Point Reyes National Seashore park in California around 45 minutes north of San Francisco. They typically weigh up to 9,000 pounds, according to National Geographic.

Here’s how it happened: Heavy rain caused flooding in a 350-car parking lot at Drakes Beach, John Dell’Osso of the National Park Service told USA TODAY. The combination of the parking lot flood, which was not taken care of during the government shutdown, and extremely high tides, known as king tides, led the seal colony to Drakes Beach.

They typically weigh up to 9,000 pounds, according to National Geographic. (Photo: John Burgess, AP)

Dell’Osso said the park typically sees about three to eight male seals around this time of year but thanks to unusual conditions, Drakes Beach currently has 10 males, more than 40 females and approximately 35 pups camping out there.

Once the shutdown ended, officials closed the beach access road and are now warning visitors to avoid the area as to not upset the seals.

“The road has remained closed due to the sensitivity of the pups nursing at this critical time of year,” Dell’Osso explained. “However, this weekend we are experimenting by opening the road and parking lot back up, closing a small portion of the lot closest to the beach (maybe 20 cars or so), and stationing Park Rangers and docents to guide people to the edge of the parking lot for incredible viewing opportunities, but no access on the beach. Based on how this works for both visitor safety and protection of the seals, we may continue this the following weekend.” 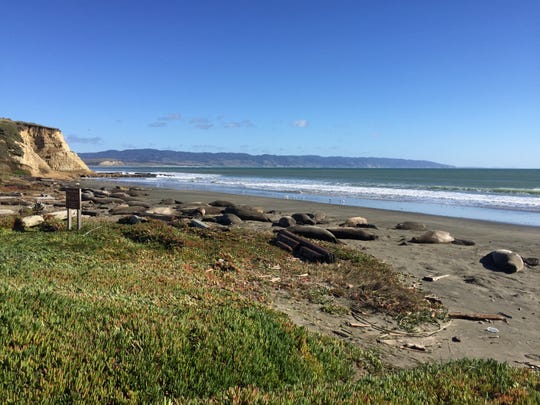 Typically, this time of year they only see about three to eight males, though now they have 10 males, more than 40 females and approximately 35 pups. (Photo: Point Reyes National Seashore)

Elephant seals have been a part of these beaches since the late 1980s, according to Dell’Osso. There are around 150,000 elephant seals worldwide, per the National Park Service.

How to watch Super Bowl LIII streaming via Hulu, YouTube and others

Hershey’s Kisses, missing the chocolate tips, are getting fixed