Several celebrities have doubled down on their support of former NFL quarterback Colin Kaepernick by vowing to boycott Sunday’s Super Bowl between the New England Patriots and the Los Angeles Rams.

Film director Ava DuVernay led the charge on Twitter, announcing that she would be sitting on the sidelines for America’s biggest football game for the second year in a row.

“I will not be a spectator, viewer or supporter of the #SuperBowl today in protest of the @NFL’s racist treatment of @Kaepernick7 and its ongoing disregard for the health (and) well-being of all its players,” she wrote Sunday. 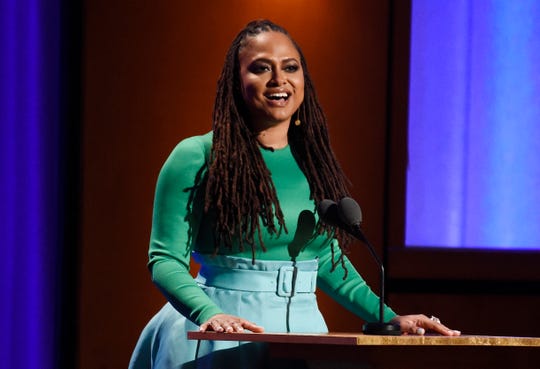 DuVernay continued: “To watch the game is to compromise my beliefs. It’s not worth it. #ImWithKap”

Related: Gladys Knight speaks out about Colin Kaepernick and why she’s singing at the Super Bow

Actress Rosanna Arquette, the older sister to fellow actors Patricia Arquette and David Arquette, agreed with DuVernay by simply replying, “Me too.”

Other celebrities voiced their support for Kaepernick with the hashtag #ImWithKap, after the former San Francisco 49ers quarterback was reportedly blackballed from the NFL in 2016 for protesting racial injustice and police brutality by kneeling during the national anthem.

Related: Colin Kaepernick Nike ad: What Hollywood is saying about the controversial campaign

Actress and screenwriter Lena Waithe shared the same image of Davis on Instagram Saturday, along with a fist emoji.

“The Masked Singer” host Nick Cannon used the hashtag to spread word of the Kaepernick-inspired “7 Challenge” Sunday. His post included a video of himself wearing an #ImWithKap jersey and reciting an NSFW poem.

“I am donating $7 to Colin’s Know Your Rights Camp,” Cannon wrote. “The number 7 symbolizes Kap’s jersey number. I challenge you to donate $7 to @YourRightsCamp and nominate 7 others to do the same. Go to KnowYourRightsCamp.com and click donate.”

Other celebrities, including Rihanna and Jay-Z, reportedly turned down opportunities to perform at the coveted Super Bowl halftime show over Kaepernick. Rapper Cardi B also passed on an offer to perform alongside Maroon 5 to “stand behind” the former quarterback because he “stood up” for minorities.

She continued: “You have to sacrifice that…I got to sacrifice a lot of money to perform. But there’s a man who sacrificed his job for us, so we got to stand behind him.”

Maroon 5 will perform at this year’s halftime show in Atlanta with Outkast rapper Big Boi and Travis Scott.

More: RIP to the Super Bowl halftime show, no longer a cultural institution

As the deep chill thaws, stay vigilant to avoid catching a cold